a small plant with vivid flowers

As do many states and cities, Bainbridge Township has an official flower, the tuberous begonia. The begonia is a small plant, growing only 6-12 inches tall, but it commands quite a bit of attention with its vivid flowers that bloom from mid-summer to mid-fall. The flower was originally introduced to Bainbridge Township from late resident Carlton Lowe, who would later share it with the rest of the country.

Carlton Lowe was a soldier in World War I, where he saw the beautiful flower growing in a field in Belgium. The owner of the field agreed to send Mr. Lowe some seeds. It took several years for Mr. Lowe to perfect the cultivation of the sensitive and fragile tuberous begonia seeds. Before long, however, he was shipping plants across the United States. Now they are a common household plant. A greenhouse in the township still bears his name. 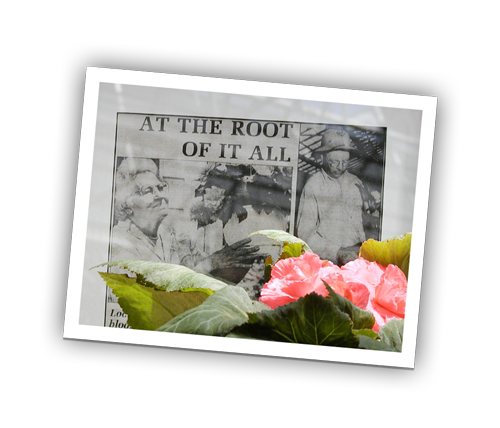 There are many tuberous types of begonias available today. Traditionally, we think of the large camellia flowered types with various color combinations grown from tubers. But also available are tuberous types grown from seed by specialty growers. These seed-started types are known as ‘Nonstops’. Flowers are smaller but produced in profusion. Common to begonias is a soil mix with plenty of peat moss and perlite for good soil drainage. The tubers can be placed directly in pots or flats of a peat perlite mix and kept at 68 to 75 degrees F for sprouting to occur. Once the pink shoot starts to grow, keep plants in a sunny area. Plants should be kept evenly moist but not wet.

Fertilizing
Fertilize every two weeks avoiding fertilizers with ammonia salt sources because crinkled and curled leaves can occur. Plants can be put outside in a semi-shaded location after all frost is past.
Measuring
Keep plants at the same level as they were in the original container because burying stems deeper will encourage stem rot. Stake plants at the time of planting.
Watering
Water weekly by applying water directly on the soil to avoid wetting leaves and flowers.
Maintaining
Fertilize on a biweekly basis with a liquid fertilizer. Larger male or center flowers will develop if the two side female flowers are removed as plants develop. Insect problems are minimal with begonias.

Diseases that can cause problems are powdery mildew, bacterial blight, botrytis, and foliar nematodes. Culturally good plant spacing, removal of dead flowers and leaves, and adequate air movement should suppress disease problems. Bulbs can be saved from year to year. Remove stems after frost has killed tops. Let tubers dry for one week then store cleaned tubers in peat moss or sawdust at 50 degrees F. Do not allow tubers to freeze.