Bainbridge Township’s history starts with the McConoughey family’s trek from Blandford, Massachusetts, in 1811, six years before the township was founded. After their 600-mile trip, they arrived to become the first residents of Bainbridge. Their cabin in the southeast corner of Bainbridge marked the beginning of the township. Other families followed them in turn, and Bainbridge grew into a sparsely populated farming community.

Bainbridge’s first road was created from an old American Indian trail which was widened, creating a gravel lane named Chillicothe Road. This made the area much more accessible to the pioneers of the day. By 1817 the township’s population was 72, and the township’s government was established. Bainbridge was named after a popular naval hero of the war of 1812, Commodore William Bainbridge. He commanded the USS Constitution, better known as “Old Ironsides.”

Auburn was part of the Bainbridge territory but was separated a year later for unknown reasons. In 1820 the census count was 199, and in the next thirty years, the population rose to 1,014. By 1940 the population had reached 1,563.

While Chillicothe was the main road of the day, three secondary roads were built-one going to Solon, one to Chagrin, and the third to Auburn. Main-Market Street, now East Washington, was the main route from Cleveland to Youngstown. At the time it was ten feet wide and paved with brick from Chagrin Falls to McFarland’s Corners. Beyond Auburn, it was an impassible dirt road until it was paved after World War I. The paving of the road made it the main route, attracting businesses and diverted traffic from the center of Bainbridge.

In the 1800s, commercial endeavors flourished in Bainbridge. Five cheese factories, a woolen mill, rake factory, brickyard, gristmills, and tannery were some of the more successful accomplishments. A number of the plants were located along Crackel Road, creating Centerville Mills. Chillicothe Road in Bainbridge Center also thrived with an assortment of blacksmith shops, sawmill, cheese box factory, and various stores.

The Old Bainbridge Store, once a familiar landmark at the corner of Chillicothe and Bainbridge Roads, was built about 1846 and was the last of the general stores in the township. It can now be seen at the Geauga County Historical Society’s Century Village in Burton.

Two early railroad lines had track through Bainbridge and the one in the southwestern portion ran by what was Giles Pond, a picnic place in the 1870s. That picnic place became Geauga Lake Park. The other line, now defunct, carried freight and sometimes passengers between Solon and Chagrin Falls.

The first telephone company was established in 1897 in Bainbridge and the first switchboard was installed in the Shubael McFarland home at McFarland’s Corner. The company grew and extended lines to Russell and Auburn. By 1927, it was sold to the Western Reserve Telephone Company in Hudson.

One of the first housing subdivisions in the township came in 1922 with the start of Lake Lucerne. A land company bought 250 acres and created a 25-acre lake. It was built as a summer-home colony, but from 1928 on, it became a year-round community. Other subdivisions followed and in the mid-1960s, Tanglewood Shopping Center was built and the township began the contemporary growth to the community we know today. 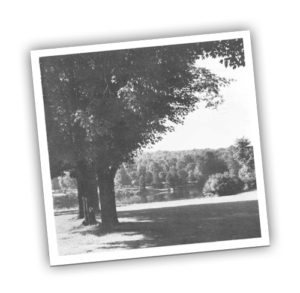